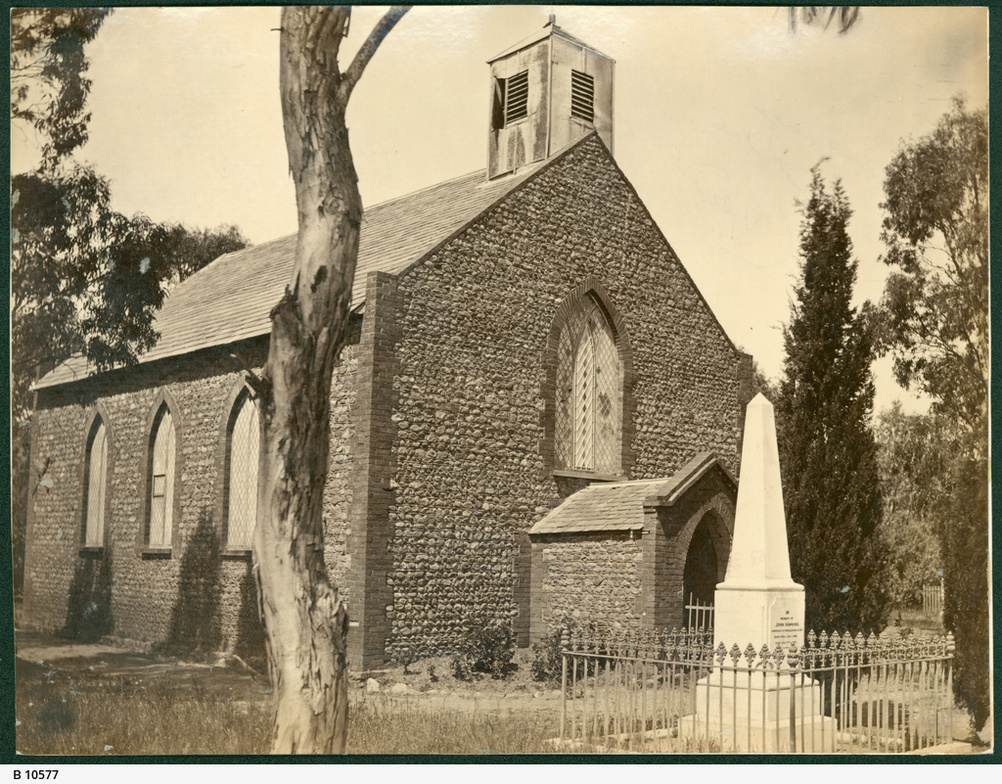 St George’s Church Magill claims the proud distinction of being the first Anglican Church consecrated in the colony of South Australia.

The land on which the Church was built was given by John Finlay Duff, Captain of the Barque Africaine. The foundation stone was laid on the 18th of January 1847 by the wife of Frederick Bayne Esq. of Stradbroke. The original building was completed in one year at a cost of 280 pounds, all from private subscription. Nearby creeks of Magill provided cobblestones to build its walls, and the beams and timbers for its roof are of pit sawn Blue Gum.

On the 30th of January 1848 His Lordship Bishop Augustus Short of Adelaide, consecrated St George’s, solemnly dedicating it for Christian worship before a crowded congregation far in excess of the two hundred and fifty people it was built to hold.

The earliest baptism was of the son of a butcher of Makgill (Magill’s original name) recorded on the 13th of February 1848. The earliest burial was recorded little more than a fortnight after the consecration of the Church. Only seven weeks after his arrival in South Australia, the infant daughter of Bishop Short was buried on the 16th of February. Her name was Caroline Phillippa Augusta Short. She was one year old. Following on were four more burials of children under three years of age.

The first marriage took place on the 21st of February 1849. We have third and fourth generations marrying in “the little country Church in the hamlet of Woodforde, Makgill”.

Still calling the devoted to services each Sunday is the original bell inscribed “Pybus, Adelaide, February 9th 1847”. It is the earliest recorded casting of a bronze bell in South Australia.

CAN WE HELP YOU?

We would be pleased to undertake a search of our records on your behalf. Our marriage, baptism and burial registers date from 1848 to the present day. A search may provide recorded information of the event. In some instances families lived in this area for several generations and we may find information of other family members.

Please download the application form as a pdf file and return the completed copy to us by post at:
St George’s Historical Group
43 St Bernards Road, Magill  SA  5072

or as an email attachment to research@stgeorgesmagill.org.